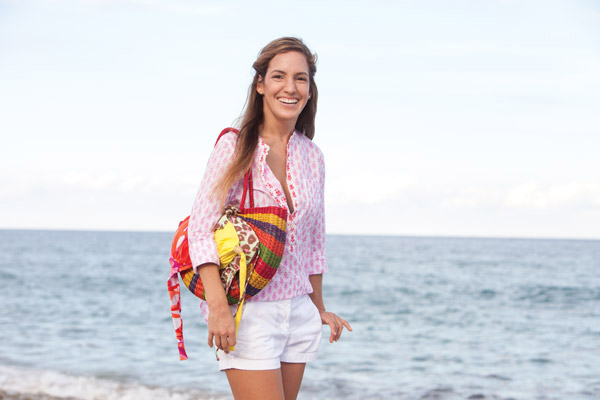 Swimwear designer Cayetana Uranga de la Borda has never let anything stand in her way – including cerebral palsy, which she’s lived with since birth.

Cayetana Uranga de la Borda has probably visited every beach in Palm Beach County, riding her bicycle or driving with her sisters to lay out in the sun. As Peruvian girls, they love the water and have more bikinis than they can count. It’s when she steps into the water and the sense of weightlessness sets in that she’s truly happy.

Uranga, 29, was born in Lima, Peru, and diagnosed with cerebral palsy at birth, a condition that impacts the brain’s ability to control muscle movement and tone. Doctors told her parents that their daughter would never be able to walk, talk or lead a normal life.

But she has done all of those things, and more – she drives wherever she pleases, has a degree in fashion management from Lynn University and a year ago launched her own line of swimwear and online store, Lolita’s Beachwear.

At 3 months old, Uranga started physical therapy, and as an adult today, she goes to the gym and does workouts with a trainer to stretch her muscles and strengthen them. The weight lifting, squats and balancing exercises all help make everyday tasks easier.

With cerebral palsy, her gait isn’t perfect, but thanks to her mother forcing her to walk everywhere with makeshift walkers as a child, Uranga has been standing on her own two feet since she was 2 years old. Plus, she and her family survived the wrath of the Shining Path, a guerilla terrorist group in Peru. Uranga remembers her mother and grandmother replacing the windows after yet another bombing.

“We lived as happy a life as possible within the red zone,” she remembers. “My grandmother was one of the lucky ones who only had to change her window glasses three times … others were left without complete buildings or lost their lives.”

The family put those days behind them, moving to the United States when she was 9 years old. With nine sisters (her parents had children from previous marriages), the girls would go to the beach.

It was during those sunny days in the blue waters – where her body feels free from cerebral palsy – that she realized she wanted to enter the world of fashion. Inspired by the colors of the ocean and the whimsy of Peruvian style, Uranga has multiple lines of women’s swimwear online at Lolita’s Beachwear. Page after page, the site displays a friend modeling the suits – Brazilian-style bikinis, ruffles, bows, bandeaus and colorful prints. Now, she’s gearing up for next year’s looks.

Her looks have been donned on the runway, and Uranga has donated suits to fashion shows for charities. A portion of her sales go to her favorite charity, United Cerebral Palsy of South Florida. Uranga hopes for more awareness of cerebral palsy.

“When I walk, people don’t think I have CP,” she says. “We’re not any different. We may walk or talk differently, but we’re the same.”